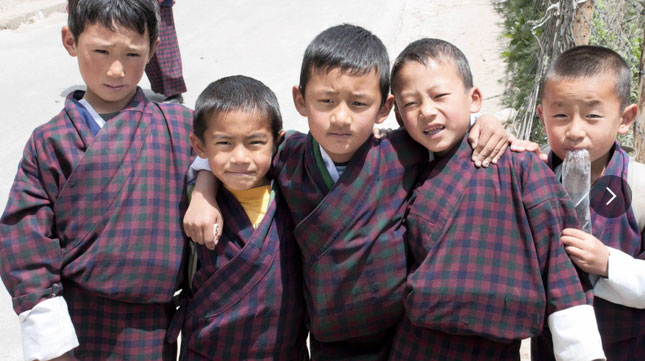 Breathe deeply, take in the oxygen-rich air which, despite the high elevation, is invigorating. For South Africans, so conscious of saving water, the ever-present gurgle, bubble and splash of open clean waterways running through the villages or waterfalls plummeting down sheer rock faces, is magical.

From the airport town of Paro, the capital Thimphu, through to mid-Bhutan and the Bumthang valley, you will find tourists, trekkers and photographers exploring this gem of a country where the national dish is the chilli-cheese or ema dates, which includes sumptuous veggies such as asparagus, peas, green beans and fiddle-head fern. Fruit from the southern plains is plentiful and mouthwatering.

Wherever I looked I found images I wanted to bring home. Especially of the many brilliant yellow- and maroon-clad monks crossing the courtyard of their monastery or turning a gold-painted prayer wheel. Buddhist monks represent more than five percent of Bhutan’s total population and live in 15th-century dzongs or fortresses, or in teaching monastries.

Their personal stillness, ready smiles and focused dedication draw my lens towards them so many times. While aiming to capture the settled sense of happiness exuding from men steeped in their practice, I found the tenderness of childhood innocence gave itself willingly to my camera clicking.

Even a six-year-old lama incarnate was irresistible.

“No photos,” he said while he laughed and flicked a cloth at my legs. His giggles were infectious and heart-warming.

There was no doubt that he was securely in command over the foreigner with cameras for necklaces.

My most memorable shoot was of an obliging eight- or nine-year-old skinny, young monk, with a plate of rice piled high, who made his way across the white-washed courtyard. He willingly stopped and stood serenely while I clicked away until my stomach started growling in tune with his.

A quick look at his image on the small screen at the back of my camera, a broad smile and a nod, and he was off, up the steep wooden steps to partake of his meal.

Bhutanese festivals are a great attraction. Male dancers wear full-skirted costumes of bright contrasting silks and grotesque masks to ward off or bring down evil entities.

With each dance dedicated to a spiritual ritual, the dancers whirl and twirl in a splash of rich colour and ancient choreographed steps – a photographer’s dream.

Everywhere a visual feast of gesture, action and splendour. Whether a movement frozen in time or captured with motion blur, the memory is trapped, taking its place in my growing collection.

The locals crowded into the courtyard and took their places from early morning, with their many packages of food. Brightly dressed in their best to honour the spirituality of the day, they offered photographers an engrossing array of images.

From babies strapped to their mothers’ backs with their sleepy eyes and lolling heads, to old men and women, bespectacled, age-lined, who watched the day’s happenings with unmasked delight – I was in my photographic element.

Arts and culture schools throughout Bhutan train young men and women in handicraft, weaving, sculpture, wood carving, drawing and painting using age-old traditional techniques. Silk, imported from India, is woven according to Bhutanese traditional patterning. I love their use of both primary and blended colours, and the many flower patterns intricately fashioned into their designs. Their weaving and hand embroidery were irresistible, being some of the finest I have seen in my travels.

The women wear their traditional dress, the kira, and the men, a gho. The former is an exquisitely woven rectangular cloth wound around the body worn with a brightly contrasting or colour-matched short jacket with large turned-back cuffs, held closed across the breast with a silver and turquoise brooch. A gho is best described as a knee-length jacket with a broad back pleat and large “pouch” in the front. It is surprising what the men carry in this pouch, anything from a rice bowl to a camera.

Draped across the shoulders, over the back and around the body is a long piece of cream-coloured raw silk sporting long tassels. Official dress must be worn whenever entering an official building. I seldom if ever saw the Bhutanese wearing denim jeans or Western-style clothing.

Two territorial giants, China and India, flank Bhutan’s borders. The ever-hungry, growing Indian economy buys Bhutan’s major export, hydroelectricity. In return, eager-to-learn Bhutanese students are offered both under- and post-graduate opportunities to study at India’s most prestigious universities. They are not the only ones keen to learn. Every child in the country attends school and, if they do not, are assessed for a disability and managed accordingly.

The official language is Dzongkha, derived from Tibetan, however English is the medium of instruction in schools. Children of all ages articulate their questions and conversation with a natural ease. They are certainly not shy to speak English, with roadside discussions going far beyond the usual, “Where are you from?” The teenage girls I met had formulated their aspirations to become an architect, teacher, ophthalmologist or doctor. Few want to follow their families’ farming heritage.

The Bhutanese frown on children asking for anything, not even a pencil or to see the photograph you have taken of them. It became a thrill to see their eyes light up and hear their comments chorusing their recognition whenever they crowded around my camera to see themselves. Poverty is not visible, though the people are not rich. Every family has a house, the markets are clean and the greater majority carry themselves with a bearing which exudes an unparalleled national dignity.

Travel in Bhutan is at the pleasure of the government. No tourist is allowed to wander around the country on $10 a day. Rather $220 a person a day is paid to the government and forms a portion of the cost of your Bhutanese guide – a “must have”, Bhutanese driver and equally essential food and accommodation. Our guide, Pema Sonam, of Bhutan Creative Tours (bhtcreativetours@druknet.bt) excelled in his knowledge, countrywide network and helpfulness. He made sure our every need was met.

Most memorable was the hike to the Tiger’s Nest, a dzong precariously perched on a sheer rock face. Although the option to get there on the back of a pony is offered, it makes an unbeatable climb culminating in a sense of achievement. Along the way one is treated to the odd “rhodie” which opened early, marvellous lichens and mosses clinging to the trees, dense forest, vast vistas and the seemingly never-ending upward path often bedecked with prayer flags. The valley between your first face to face with the Tiger’s Nest, where the second Buddha flew in on the back of a tiger, is festooned with a rich array of prayer flags catching the breeze, dancing every-which-way, mesmerising – a feast for photographic creativity and capturing the spectacular.

Combined, this comprises the country’s Gross National Happiness, a calculation at the fulcrum of the true value of Bhutan. King Jijme Siingye Wangchuch formulated the index when he announced his vision for his country in 1974. Rather than sacrifice the Gross National Happiness in favour of the more widely accepted Gross National Product, he saw fit to ensure his people move towards modernisation and materialisation without losing sight of the true values of contentment and well-being, quality of life and traditional values.

What keeps the stillness of the Bhutanese people ever present? Is it their prayers to the second Buddha? The presence of the monks continually reminding them of their spiritual heritage? Whatever “it” is, there is a strong likelihood that I have captured “it” in a face, eye or a whirling skirt. What I do know is that if you go to Bhutan to seek the Buddha, you may well find that, when you left home, you had taken your Buddha with you. – Weekend Argus

Lorem Ipsum is simply dummy text of the printing and typesetting industry. Lorem Ipsum has been the industrys standard dummy text ever since the 1500s, when an unknown printer took a galley of type and scrambled it to make a type specimen book.